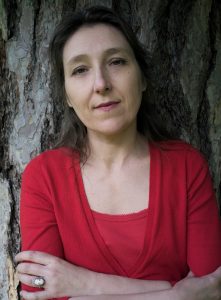 Marie Darrieussecq was born in 1969 in the Basque Country, France. A student at the Ecole Normale Supérieure, she wrote a Phd about autofiction and autobiography in 1997. She has published more than twenty books, novels, short stories, biography, theater, non-fiction, and translation. She was a psycho-analyst for a while before turning exclusively to writing. Since her debut bestselling novel “Truismes” in 1996 (American translation under the title Pig Tales, 1998), she has remained faithful to her French publisher POL. A laureate of the Prix Médicis and of the Prix des Prix in 2013 for her novel “Il faut beaucoup aimer les hommes” (Men), she was awarded the Prix CIEF for all her work, in 2021. Her books are translated in many languages.

Abdellah Taïa was born in Rabat, Morocco, in 1973. He is the first Arab writer/filmmaker to publicly declare his homosexuality. Taïa is the author of nine novels written in French, including Salvation Army (2006), An Arab Melancholia (2008), both translated into English by Semiotext(e), and Infidels (2012) published by Seven Stories Press. His novel Le jour du Roi was awarded the prestigious French Prix de Flore in 2010. Salvation Army, his first movie as a director, is adapted from his eponymous novel. The film was selected for the Venice Film Festival 2013, TIFF 2013, New Directors 2014, and won many international prizes. His novel A Country for Dying, translated into English by Seven Stories Press, was published in the USA in 2020.